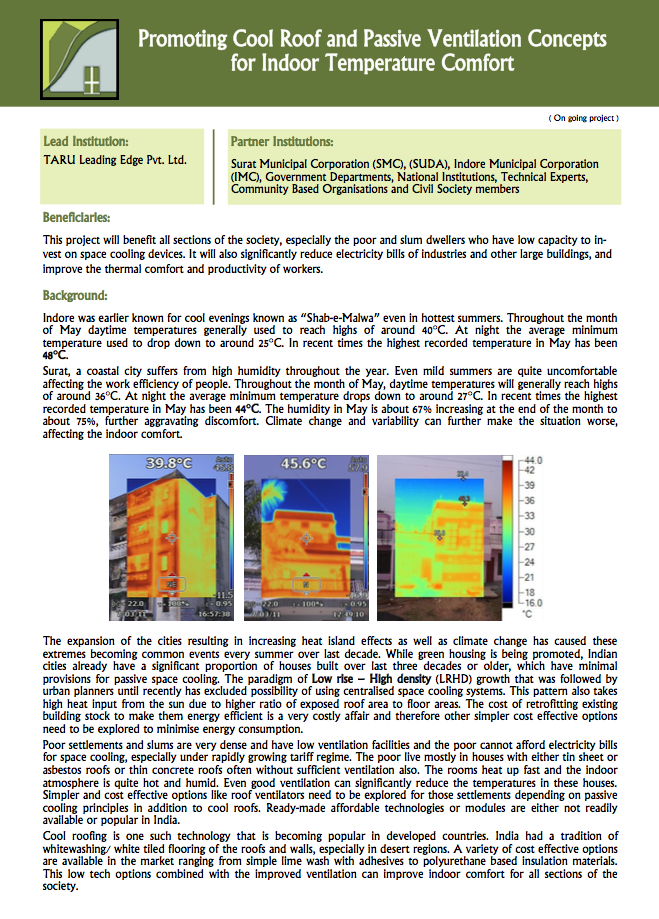 The expansion of the cities resulting in increasing heat island effects as well as climate change has caused these extremes becoming common events every summer over last decade. While green housing is being promoted, Indian cities already have a significant proportion of houses built over last three decades or older, which have minimal provisions for passive space cooling. The paradigm of Low rise – High density (LRHD) growth that was followed by urban planners until recently has excluded possibility of using centralised space cooling systems. This pattern also takes high heat input from the sun due to higher ratio of exposed roof area to floor areas. The cost of retrofitting existing building stock to make them energy efficient is a very costly affair and therefore other simpler cost effective options need to be explored to minimise energy consumption. Poor settlements and slums are very dense and have low ventilation facilities and the poor cannot afford electricity bills for space cooling, especially under rapidly growing tariff regime. The poor live mostly in houses with either tin sheet or asbestos roofs or thin concrete roofs often without sufficient ventilation also. The rooms heat up fast and the indoor atmosphere is quite hot and humid. Even good ventilation can significantly reduce the temperatures in these houses.

Simpler and cost effective options like roof ventilators need to be explored for those settlements depending on passive cooling principles in addition to cool roofs. Ready-made affordable technologies or modules are either not readily available or popular in India. Cool roofing is one such technology that is becoming popular in developed countries. India had a tradition ofwhitewashing/ white tiled flooring of the roofs and walls, especially in desert regions. A variety of cost effective optionsare available in the market ranging from simple lime wash with adhesives to polyurethane based insulation materials. These low tech options combined with the improved ventilation can improve indoor comfort for all sections of the society.

As climate change threatens transport, Indonesia needs to plan ahead

Adaptation to climate change — how well is Dhaka doing?

POLICY BRIEF: Adaptation to climate change in the hydroelectricity sector in Nepal