Skip to content
HOME Least Developed, Most Vulnerable: Have Climate Finance Promises Been Fulfilled for the LDCs?

Least Developed, Most Vulnerable: Have Climate Finance Promises Been Fulfilled for the LDCs? 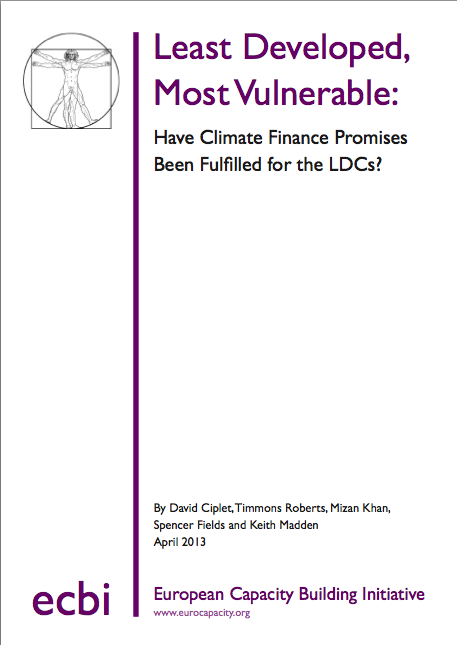 As part of the Copenhagen Accord, wealthy nations pledged to help developing countries transition to a lower-carbon economy and to deal with the current and future impacts of climate change. The pledges were substantial, but by no estimate adequate: US$ 30 billion of ‘fast-start finance’ (FSF) over three years from 2010-2012 which was to be ‘new and additional,’ with a ‘balance’ of funding between mitigation and adaptation.

This paper includes a systematic review of the reports filed to the UN Framework Convention on Climate Change (UNFCCC) in 2012 of the nations that promised to provide this US$ 30 billion in FSF over the period. Expanding upon our FSF assessments for 2010 and 2011 and our 2011 transparency scorecard, we assess whether wealthy nations transparently contributed a fair-share of the US$ 30 billion pledge, while balancing adaptation and mitigation funding, sourcing funds through UNFCCC channels, and without reverting to debt-inducing loans in the place of grants.

This report focuses, in particular, on the extent to which wealthy nations are meeting their obligations to the world’s 48 Least Developed Countries (LDCs). This is critical given the heightened vulnerability of this group of nations. Over the period from 1980 to 2011, LDCs have experienced 66 percent of all deaths from climate-related disasters, while only constituting 12 of the world’s population.  Thus, people in LDCs are five times more likely to die from climate-related deaths than those in other parts of the world.

We found that wealthy countries have not met expectations during the fast start period. 2012 FSF reports show that only two of the ten contributors committed their ‘fair share’ of fast-start climate finance, assessed on their capability and their responsibility for the problem. While contributors have surpassed their commitment of US$ 30 billion during the period, less than a third of this money is ‘new and additional’ as promised. Only one-quarter of climate finance (or less) supports adaptation in developing countries, in spite of promises to ‘balance’ it with mitigation funding. Only Switzerland received a ‘pass’ grade in this year’s transparency scorecard. Less than half of committed funds are grants. Only four percent of FSF is flowing through the UN, where they could strengthen trust between contributor and recipient nations.

In addition, despite the strong commitment by LDCs to respond proactively to address the most urgent climate change impacts through the National Adaptation Programmes of Action (NAPAs), only US$ 603 million has been pledged to the LDCF since its founding. This is less than one-fifth of the $3 billion needed for the top priorities in initial NAPA project listings, and represents only 4 percent of the total FSF committed to developing countries. Moreover, only a fraction of the funds contributed to the LDCF have been disbursed.  On the positive side, many LDCs are ready to play a greater role in ensuring awareness of climate change and demonstrating the way forward for other nations to learn the lessons they have on the frontlines of coping with climate change.

With international support, the Cook Islands braces for climate change

India: Why climate change adaptation projects fail to take off?