Skip to content
HOME Assessment of Capabilities, Needs of Communities, Opportunities and Limitations of Weather Forecasting for Coastal Regions of Bangladesh

Assessment of Capabilities, Needs of Communities, Opportunities and Limitations of Weather Forecasting for Coastal Regions of Bangladesh 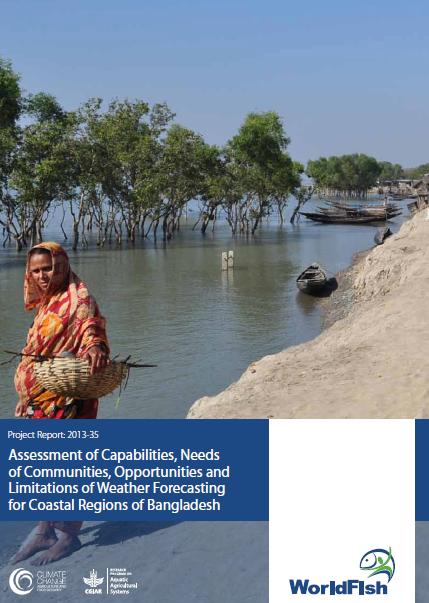 Bangladesh is highly vulnerable to a range of potential natural disasters due to its: i) unique geographic situation—80% of the country’s 140,000 km2 are eᴀectively Ḁoodplains of major river systems (Hopson and Webster, 2010) and much of the country is less than10 meters above sea level; ii) very high annual levels of rainfall—mean annual rainfall is approximately 2300 mm (World Bank 2012a); iii) high density of human population (approximately 150 million inhabitants); iv) high population density and growth of density—1142 people/km2 of land (World Bank 2012b); and v) poverty—GDP/capita for 2011 was US$735 (World Bank 2012b). This population is bolstered by inḀuxes of migrant workers into southern Bangladesh that coincide with two storm seasons.Given this inherent vulnerability in a number of areas, Bangladesh also faces a number of diᴀerent types of natural disasters.

Ecosystem-based adaptation: a handbook for EbA in mountain, dryland and coastal ecosystems