We provide a web service, RuleWatcher® which automatically collects and visualizes sources from legislations and parliaments of each country, UN-related organizations and major NGOs around the world by the power of text mining. In concrete, RuleWatcher® collects all the information daily and automatically, which contains only primary sources such as policy suggestions and minutes of congresses related to rulemaking process. All the sources are to be translated in English no matter which language they originally have. After that procedure, the data is to be categorized by keywords and visualized.

Below are the main issues we put focus on currently.

As shown in the judgement of Rechtspraak(the supreme court of the Netherlands), climate crisis is now strongly connected with human rights. Declaration of carbon neutral society by Japanese prime minister, Mr. Suga, green deal policy of the U.S. president, Mr. Biden, and China, who has been the critical actor for the world’s climate, clearly aims at decarbonation and rapidly introduces renewable energy. Hydrogen energy, DRC and such new technologies are getting more attention, but it is pointed out those could negatively affect environment, either.

There is no time left until 2030 which is said to be the turning point for climate crisis. We face natural disasters too often, recently, which makes us feel that the road to a better future is missing. RuleWatcher® provides critical information in order to change the path towards the sustainable future.

Ocean plastics have been on a table. It is assumed that every year, plastics equal to the amount of 50,000 airplanes go into the ocean where already 150,000,000 tons of plastics are inside. To solve the issue, for instance, Britain and EU impose strict regulations. Though there are new materials to replace plastics, some of them are turned out to be not environmental-friendly. It is also true that plastics have many efficiencies: help keeping foods fresh for longer term, secure sanitation in hospitals and reduce the consuming energy of transport with their lighter weight.

What can be the best answer when solving one issue could lead to another problem? RuleWatcher® provides detailed information to discuss and think about a better solution.

Due to agriculture which provides food for 7 billion populations, ground water around the world is rapidly decreasing. In addition, due to globalization of food consumption, those crops become the export items and it leads to an endless scale-up of agriculture. The decrease of water resources has been accelerated because of the reduction of rich forests and snow. Already, there has been those who had to run away from their own lands because those were no longer suitable for cultivation.

In the whole world, 40% of all the populations live beside 263 international rivers. If dams were built at the upper area, the total amount of water would decrease. If any kind of pollution occurred up on the river, health of people living in the lower area would be threatened. The risk of conflicts is rapidly increasing in those areas, which is a key issue for the international security. RuleWatcher® also collects such information regularly.

How do we shift the world to be sustainable? One of the answers is circular economy. For 250 years since the Industrial Revolution, we have been getting resources, manufacturing, consuming and throwing them away. It is said that getting rid of such linear economy is the key for SDGs. Now we need a total design, not like “recycle” or “3R”, so as not to waste and pollute anything. If we want to rely on renewable energy, minimize the use of harmful materials and prolong the lives of the products, it is required to assure the route of gaining renewable materials, create a tracking system of raw materials and product designs suitable for dismantling.

Now the common senses from previous eras are no longer a standard. It is considered as a risk, while it lies as a huge business opportunity. We hope researchers and companies who use RuleWatcher® to make use of the knowledge they gain from here.

We, OSINTech Inc., have more than 500 information sources to crawl and collected almost 300,000 text data. This is called OSINT (Open Source Intelligence), which is an intelligence based on open data.

RuleWatcher® also forms a next generational platform for community, where it provides OSINT widely to researchers, policy makers, planning and strategy department of companies, civil activists and such so that people are to be connected based on their ambitions to solve social issues beyond national borders.

Also, OSINTech Inc. made an academic contribution in a cooperation with Chubu University and Kobe Institute of Computing; Graduate School of Information Technology, which is a processing of academic papers, utilizing text mining. What we did is to collect text data from academic papers related to “reservoir”, replace geographical names and landmarks with locational information spotted with latitude and longitude, then map them on GIS, making it possible to search essential information inter-sectionally. This commitment can be a solution for an adaptation for climate crisis which fulfills intersectionality and localness at the same time.

Climate crisis, drain of fresh water resources, ocean plastics and such are cross-border issues. RuleWatcher®, with the latest technology of language processing, shows various cases in different countries which have not been easy to be collected and visualized due to the language barrier.

We continue challenging ourselves to visualize a relationship among policies, academia and technologies in each country. By doing so, OSINTech Inc. will offer a place where more and more people can deal with worldwide issues utilizing the power of intelligence. 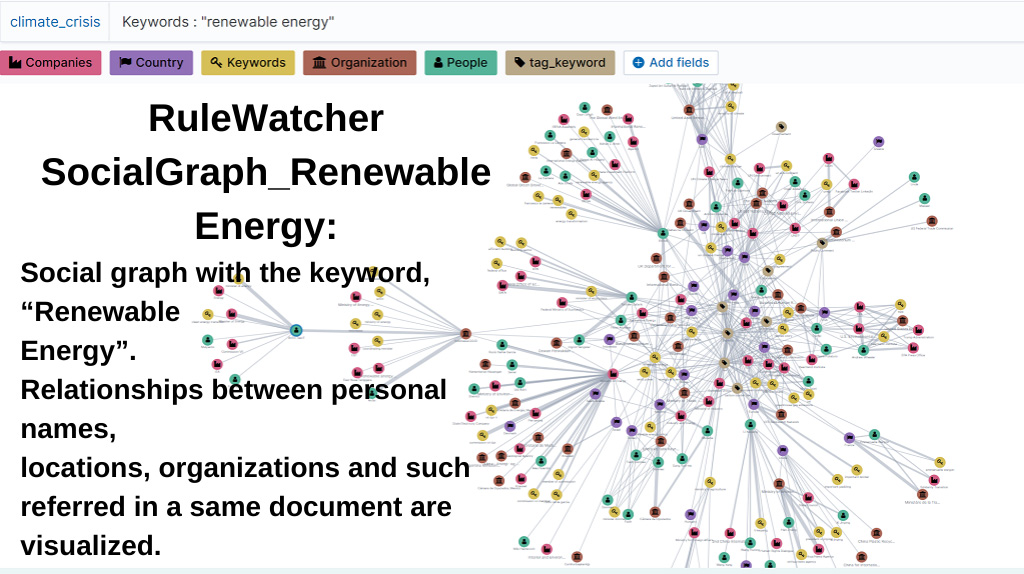 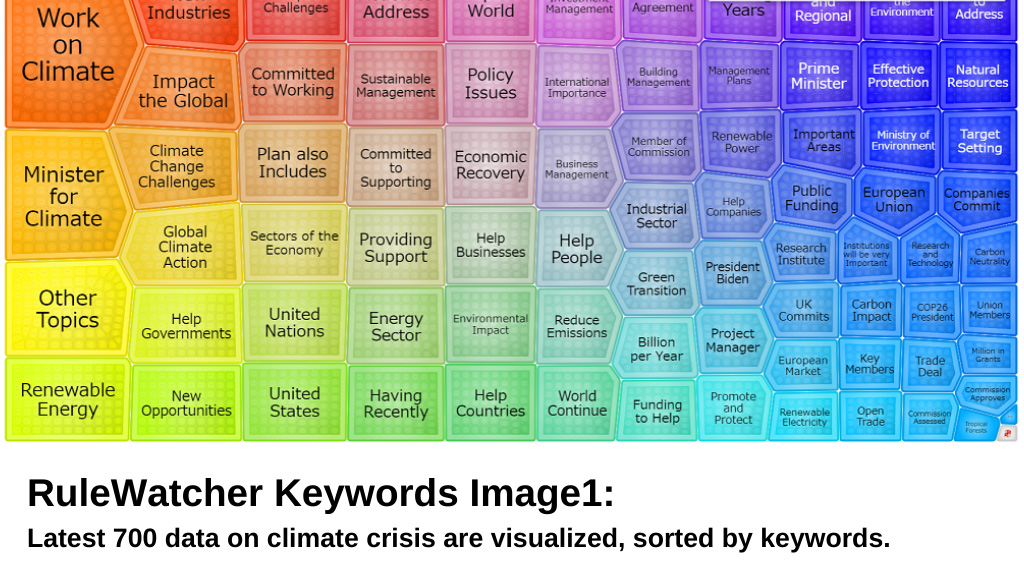 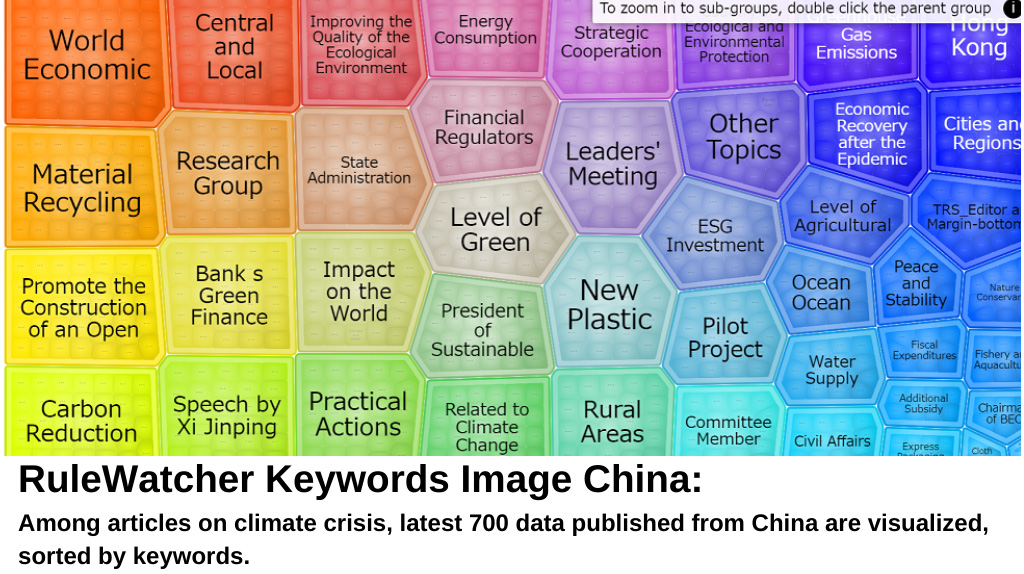 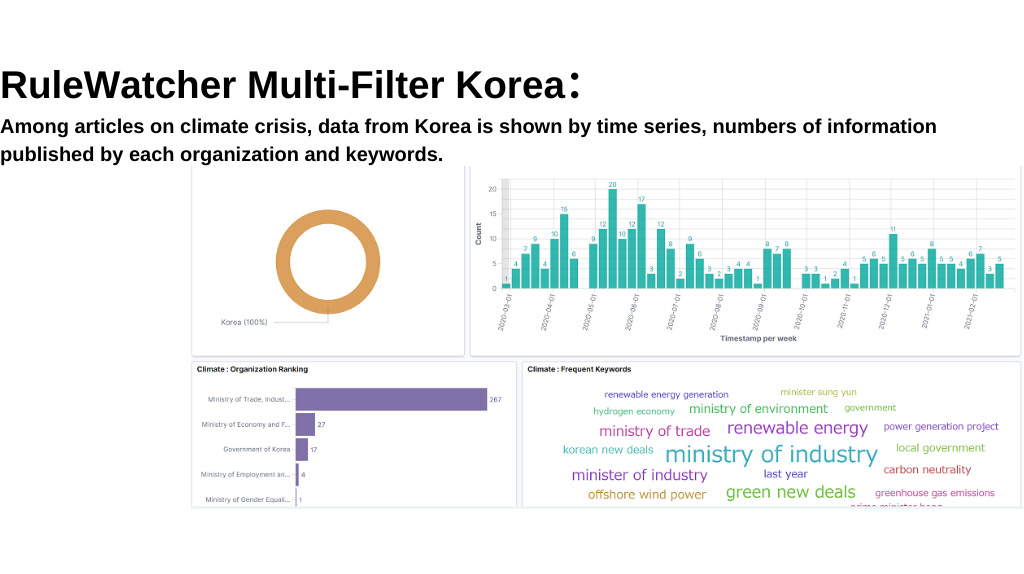 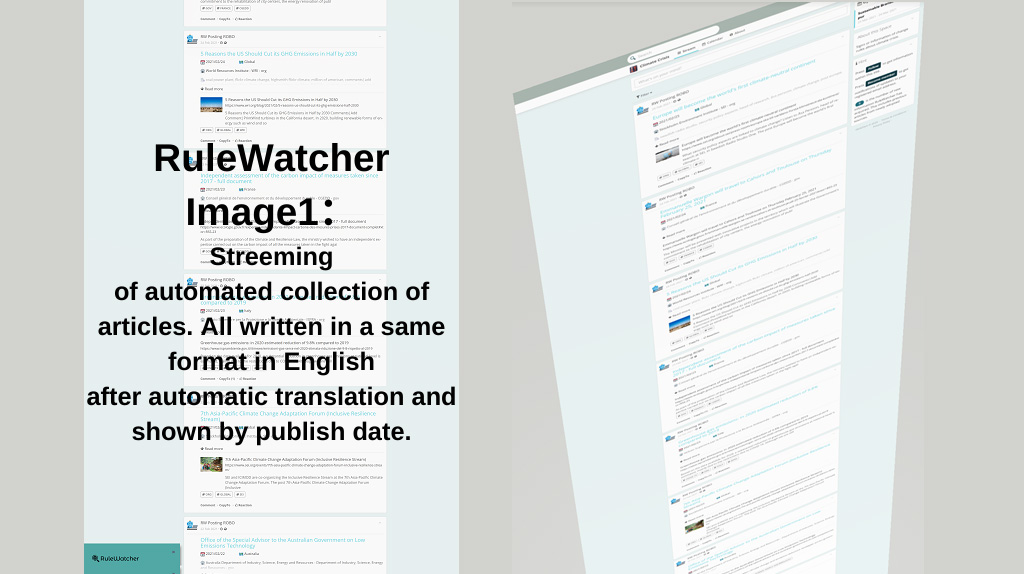 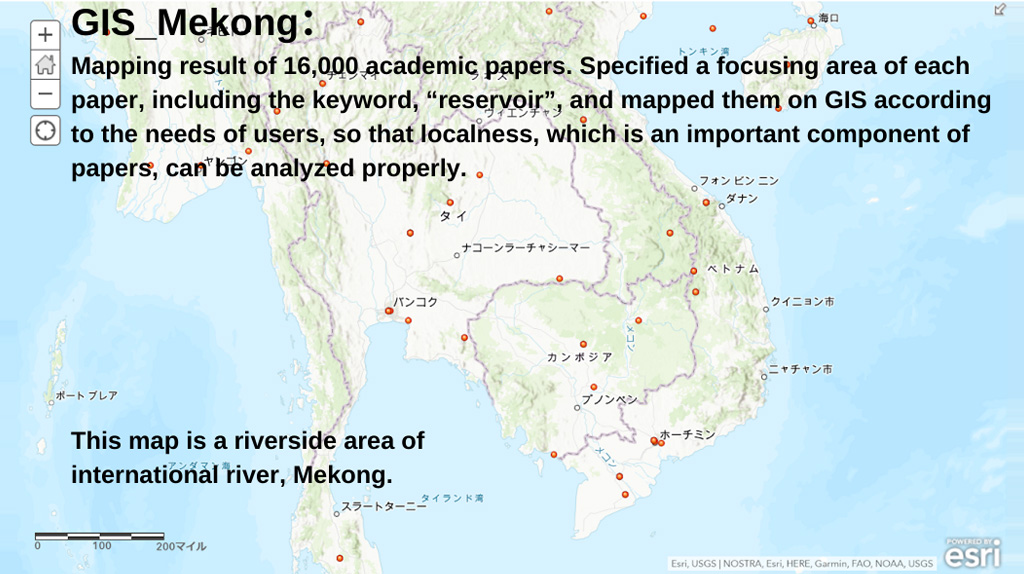 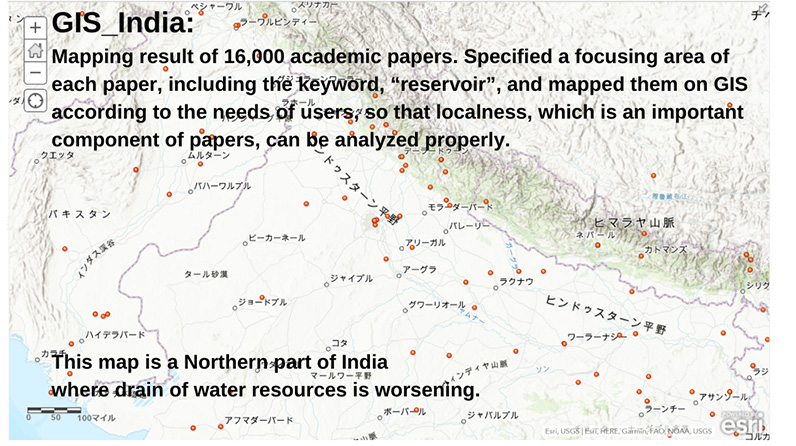 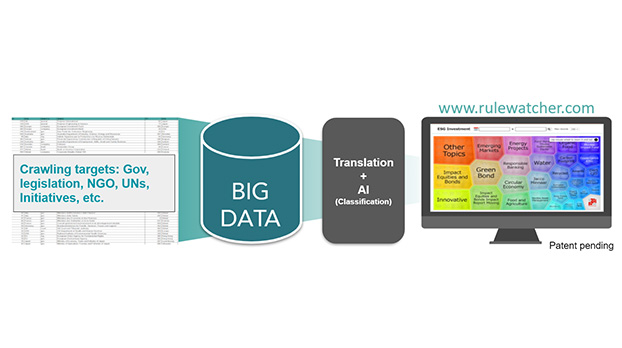