Enabling Resilience for All: The Critical Decade to Scale-up Action 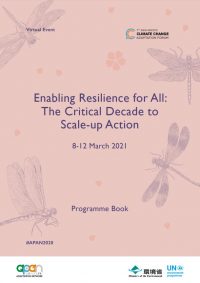 In ancient mythology, Japan was known as Akitsushima, which literally translates as “Land of the Dragonflies”. Japan, along with many other countries and cultures around the world, have long recognised the dragonfly as a symbol of change, agility and persistence. More recently, biologist have discovered dragonflies amazingly have full 360-degree vision, a trait we believe the 7th Asia-Pacific Climate Change Adaptation Forum’s work can embody.

A Japanese proverb about the importance of unity, based on a story told by the 16th century warlord Mouri Motonari to his three sons in his later years. Motonari first took an arrow and easily broke it. He then tried to break three arrows in a bundle, but was unable to do so. He told them, “One arrow is easy to break, but three arrows together are not so easy to break. I hope you will unite to protect the Mori Family.” Three sons vowed to follow his teachings. This is a message from Japan, the host country of the 7th APAN Forum to convey the message to unite the wisdom of the various actors in the Asia-Pacific region to promote adaptation in this era of Climate Crisis. 三矢の訓 （みつやのおしえ / Mitsuya no oshie.